Modeling Processes In The Marine Environment

The 2010 Deepwater Horizon oil spill released an estimated 4.9 million barrels of crude oil into the Gulf of Mexico. Some of the oil released rose to the surface, but a large amount was trapped in a layer between 1000 – 1300 m deep, a deep intrusion layer. Understanding the fate of oil within the water column is important for understanding the impact it had on various ecosystems, as well as for planning for future oil spills. In this project we are developing computer models of how oil droplets interact with large marine particles (called marine snow) in the water column, and then sink to the sea floor. In doing so, many of these marine-oil-snow particles will collect oil as they sink through the deep intrusion layers, carrying oil from those layers to the sea floor. This research is being conducted in collaboration with groups led by Kendra Daly at the University of South Florida and Uta Passow at the University of California, Santa Barbara and is funded by the Gulf of Mexico Research Initiative. 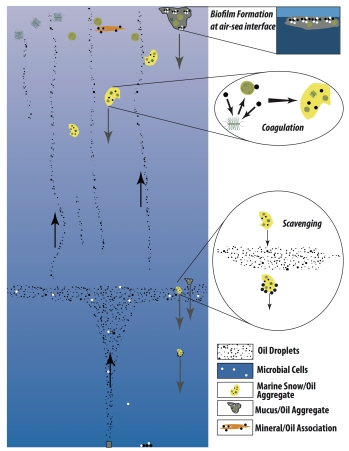 A schematic of the processes being considered as part of this project. Oil droplets rise from the deep ocean and aggregate with phytoplankton, fecal pellets, and mineral particles in the water column to form Marine-Oil-Snow. These large particle sink, carrying oil with them through to the sea floor. Oil trapped in deep intrusion layers can be scavenged by these falling particles, contributing to the oil arriving on the sea bed.

Studies of deep-sea sediments in the region suggest that as much as 20% of the oil trapped in these layers accumulated at the sea floor, and the composition of this material strongly suggests that it arrived within marine snow aggregates.

There are several models we are developing for this project, each model having different levels of detail and complexity. The first model uses our existing coagulation models to develop initial predictions for the oil scavenged by marine particles. This model will be act as a place-holder within the General NOAA Operational Modeling Environment (GNOME). A second model use a more sophisticated representation of particles and their composition to predict changes in the particle size spectrum in the water column. This model is based upon a model developed by Tinna Jokulsdottir and David Archer.

The development of the models relies heavily on the availability of data. For this, we will be using data collected and analyzed during the Deepwater Horizon oil spill, supplementing it with laboratory and field data. Field data comes from sediment traps deployed in the Gulf of Mexico and from the use of a camera imaging system (SIPPER) which collected over 100 million images of marine snow particles over 13 cruises. Some typical images are shown below, and they allow us to examine how particle concentration varies with particle size, as well as investigate the structure of the particles themselves.

In addition to field data, we also make use of laboratory experiments to help determine crucial parameters that cannot be obtained from field data. Much of this data comes from experiments using rolling tanks (see below) that allow particles and oil to aggregate without sinking.

These field and laboratory data are invaluable in providing detailed information about the marine-oil-snow particles and their interactions, and they also provide critical data that can be used to test the results of our modeling efforts.

As part of this project we are developing a suite of educational resources for middle school and high school teachers. These materials introduce students to marine snow, what it is, how it forms, its effect on ocean systems and in particular, how it affects affects oil in the water. The current version of the lesson plan materials can be downloaded from Marine-Snow-Educational-Materials.